Find us in Google Maps

Area of Restoration and Revitalization of Cultural Heritage

This is the most social aspect of ARQUEOSUR Estudio de Arqueología, S.L., and the one that connects best with our business vocation. In this sense we have restored objects recovered from various archaeological excavations, as well as structures and ruins of ancient buildings. 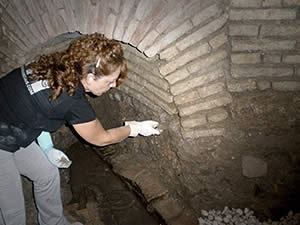 Special mention goes to the integration of archaeological vestiges in the center of the city of Malaga, emphasizing the case of a XI century tannery, that currently may be visited at Plaza de las Flores, and the plan of a medieval street (X century) in Calle Arco de la Cabeza.

Most particularly we would like to refer to the integration of different city walls of Roman, (III century), medieval (XI to XV centuries) and modern times (XVI to XVIII centuries), as well as part of the medieval urban layout at the Hotel Posada del Patio (Pasillo de Santa Isabel, 13), an integrated area of --- sqm with great public acceptance.